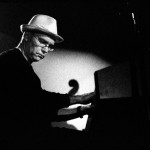 Wieselman first worked with Frisell when they were both band members in Wayne Horvitz’s “The President” He then made a duo recording with him of Robin Holcomb’s music and then appeared on Frisell’s album “Before You Were Born” Lately he has been in Frisell’s ensemble for accompanying Hal Willner reading Alan Ginsburg’s “Kaddish” and the Willner produced reading of Hunter S. Thompson’s “The Kentucky Derby is Decadent and Depraved” Wieselman’s association with Horvitz goes back a few decades, originally meeting him at U.C. Santa Cruz, playing in a concert of music by Monk and Ellington. Horvitz introduced him to New York’s “Downtown Scene” in the early ‘80’s. He has worked with Horvitz in many contexts – from playing loud music with The President, to performing Horvitz’s chamber music, to the large ensemble The New York Composer’s Orchestra, to theater as well as his score to Charlie Chaplin’s “The Circus”, which is released on Tzadik.